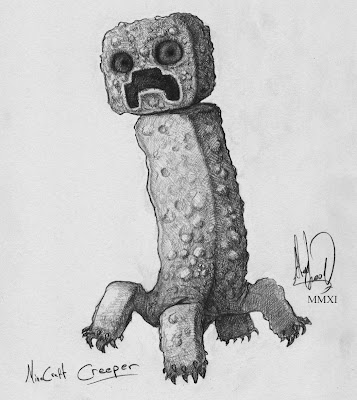 The Creeper is the quintessential Minecraft mob.  An ambush predator.  Though not necessarily bent on the destruction of your creations, they regularly damage them as a side effect of focusing on damaging you.  Much like a bee, their 'attack' results with their own demise.  The 'attack' is a suicidal explosion, that damages a small radius around the Creeper.  Any blocks within this radius are annihilated and whatever player created work is also destroyed.  Point is, this mob is a jerk who wants you dead... stay clear of him.  He doesn't want to hug you, he isn't cute, and he's a sociopath who wants you to fail.

When you hear it's signature hiss... It may be too late.  It does not sleep, it will find a way. It is the Creeper. Drawing on paper.


Check out my Ghast Fan Art and Enderman Fan Art too.

I'm writing a story and need a sketch of a creeper sketch in it. Can I, by chance, use yours? I will give you a URL credit of your choice, if you wish.